For one brief moment on Christmas Eve, 1968, we on the earth began to understand our relationship in and with this universe. I have even used a copy of the recording of the reading from Genesis that Frank Borman, Jim Lovell, and Bill Anders read as the orbited the moon that evening to illustrate that relationship. 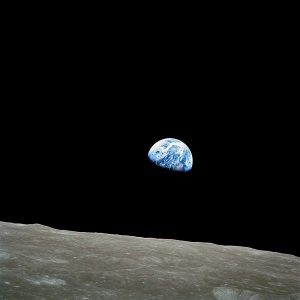 And yet, in that moment of enlightenment and understanding, there were those who felt it was highly inappropriate and possibly illegal for three astronauts to read the words of Genesis while watching the lifeless void of the moon and the darkness of space. The documentaries of that time tell us that it had not been a very good year and it probably wasn’t. After all, Martin Luther King, Jr., had been assassinated in Memphis in April and then, Robert Kennedy was assassinated in Los Angeles in June. The Democratic National Convention was a disaster in more ways than one and the sum total of violence throughout that year pretty well made sure that Richard Nixon would be elected on a law and order platform buttressed by the “silent majority”. It seems to me that, with the singular exception of the Apollo program, all 1968 did was set things in motion for where we are today. And with the landing of Apollo 11 the following summer, even our exploration of the universe began to shut down. In the years that have come and gone since we first saw the surface of the moon up close, we have moved backward from the ideals that lead us to seek knowledge beyond the stars. And the violence that threatened to tear this nation apart then has not left and, perhaps, is even more present today. So on this Christmas Eve, I hope that we will pause for a few brief moments to ponder the birth of a child born far away from His home in a time of oppression, then think about the possibilities that we saw when three men from Earth saw the surface of the moon and reminded us from where we came. Let us take the time today to make sure that the Christmas story is told and that we will work for peace and understanding in the coming days.

Here are my thoughts for Christmas this year.

If we are to give meaning to the story of Christmas that we tell this year, we ought to start with what we know.

For some, the idea that Jesus Christ was ever born is a fantasy or superstition. But something happened some two thousand years ago that caused some people to write down some stories and tell them to others and risk their lives in doing so. And while it may not always be possible to factually verify everything, that we are still telling the story today should tell us that there is a certain degree of truth in the story.

But let us start with the knowledge that we know Jesus probably wasn’t born on December 25th or in December for that matter. With the statement in Luke’s Gospel that the shepherds were in their fields that night, we can surmise that Jesus was most likely born in either March or early April.

But if we were to celebrate Jesus’ birthday at that time, there would inevitably be a conflict with Easter and that would probably not be a good idea.

We also know that those involved in the early church coopted a pagan holiday that occurred during the winter solstice as the date for Christmas. One supposes this was done to change the focus but, as we will see in a few moments, there was at least one other compelling reason.

But let me just say at this moment, if you profess to be an atheist, why are you disturbed by all of this? By your own declaration, you do not believe in any sort of god or gods, so the actions of one group to “steal” another groups holiday should have no effect on you.

And as an atheist or even as a pagan believer, if you participate in any sort of gift exchange because it is Christmas, then you are in it for yourself and that is not nor has it ever been the story or meaning of Christmas.

I would also add that those many self-righteous individuals who call themselves Christian but lead a life that does not contain Christ are also in it for themselves. Just because you put a sticker on the right side of your bumper that proclaims “keeping Christ in Christmas” doesn’t make you a Christian if you haven’t kept Christ in your heart as well.

You see the story of Christmas begins with an invitation, not to the rich and the powerful or members of the political and religious establishment, but to the outcasts of society. The announcement of the birth of Jesus was given to the shepherds, who by the very nature of their work, were considered ritually unclean and no self-respecting citizen in Jesus’ time would have anything to do with them.

Despite the profession as their King and his beginnings as a shepherd, the shepherd profession was not very well appreciated. I can only imagine what parents back then might have thought if one of their children were to come home and say that they wanted to become a shepherd or that they were going to marry one.

I don’t think much has changed in the past two thousand years. The people and professions change but we still exude an aura of exclusion when it comes to the people we bring to Christ or to whom we take Christ.

Yes, we have a food closet at our church; we hold food and coat drives; yes, we give food baskets at Thanksgiving and Christmas and we do all of that in the name of Christ but what happens the other days of the year. If we truly felt that no one should go hungry or naked, homeless or sick, why are we not doing something about that? Is that not what Christ said He came to this world to do and is that not part of the Christmas story?

Now, the one thing that I don’t want to do is mix up the Christmas stories in the Gospels but then again we have done a pretty good job of that on our own anyway. It may be that most people don’t know the reason for celebrating Christmas in December but they also don’t know that the story that is told is a combination of stories and that there really is no Christmas story in Mark or John.

And that makes the inclusion of the Magi all the more important. We also speak of the three wise men but we really don’t know if there were only three or if more may have been on the trip. We make the argument for three because three gifts were given. In fact, we don’t even know if they were all men (I think that we make certain assumptions about the nature of the position that are necessarily true). And we have to go to sources outside the Bible to get their names.

The Magi are in the story because they have seen signs of Jesus’ birth, signs that were available to the scientific advisers of the Israelite political and religious authorities as well. How is it that they missed them? Could it have been they were more interested in preserving their own positions than advancing knowledge? Why was it that the signs of Jesus’ birth were given to individuals outside the religious and political establishment? Could it have been that the knowledge of Christ’s birth was meant for all and not just a select few?

Even today, there are those who seek to limit our knowledge, telling us that there is a limit to our knowledge. But if their counterparts two thousand years ago couldn’t get it right, how can we trust them today?

We know that Jesus will grow in wisdom and stature so learning had to be important to Mary and Joseph. So should it be today. And just as the Magi looked beyond the horizon, so should our learning process push the envelope as well. Say what you will about the science of the Magi, it was the foundation for the science of today. They sought answers to questions and that is what we need to be teaching today. The answer to the question will always be in what we do, not what is in some book.

It was never made clear to me when I was growing up what sort of society Jesus was raised in or what the nature of that time might have been. But I have come to know, because I have sought to find out, that though the time may have been called the “Pax Romana”, it was a peace enforced by brutal force and oppression.

Are these times any different? We still seek to establish peace through force and oppression but we are finding that it does not work. To paraphrase Patrick Henry, there can be no peace as long as war is used to accomplish it.

We are also reminded that even one of Jesus’ disciples questioned the validity of Jesus’ message because He was from Nazareth. Our own ability to understand people is often clouded by our own preconceived notions of time and place. We struggle each day to judge a person by the content of their character and not their outward appearance.

We live in a dark time, in part because the relationship between the earth and its journey around the sun. But the darkness that envelopes our lives is brought on as much by our indifference to the conditions of others and our own self-interests.

I would hope that when the early church authorities decided to co-opt pagan winter solstice ceremonies, they did so because they understood that there was more to the darkness in the people’s lives than just the position of the earth around the sun.

Christ’s birth was meant to be the light that could overcome the darkness and allow people to know that, no matter who they may be or where they come from, there was hope in this world. He came to this world to bring light to a darkened world and that is the Christmas story.

It was never meant to be a one-day event. It was meant to be the beginning of a story that lasts a lifetime and one we live each day. It was and need to be a story told by all and told to all. So, as you tell the story, remember how it began and how lives were changed.

That is the meaning of the story this year and in the years to come.

It is an old joke, told many times, but it is well worth retelling. 🙂

A young monk arrives at the monastery. He is assigned
to helping the other monks in copying the old canons
and laws of the church, by hand.

He notices, however, that all of the monks are
copying from copies, not from the original manuscript.
So, the new monk goes to the Old Abbot to question
this, pointing out that if someone made even a small 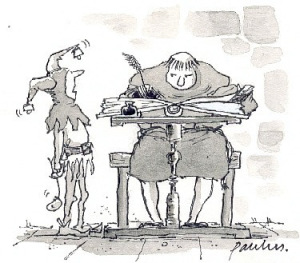 error in the first copy, it would never be picked up!
In fact, that error would be continued in all of
the subsequent copies.

The head monk, says, “We have been copying
from the copies for centuries, but you make a
good point, my son.”

He goes down into the dark caves
underneath the monastery where the original
manuscripts are held as archives,
in a locked vault that hasn’t
been opened for hundreds of years.

Hours go by and nobody sees the Old Abbot.
So…

What I have written